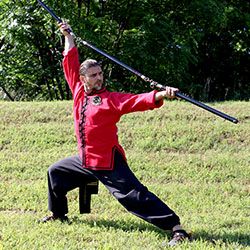 Sifu Thomas Leverett is a 10th Generation practitioner of the Northern Shaolin 7 Star Praying Mantis system of Kung Fu. He began his training in 1997 while completing his B.A. degree from the University of Texas Austin in Anthropology and Archaeology. After training for 6 months, Thomas was asked by his teacher to become an instructor and help teach some of the classes.

It was during this time that he discovered his own passion for teaching others. This passion and experience led him to become a 6th grade Language Arts teacher for six years, while he continued to train and lead classes for his Sifu, "Teacher," until the time came for him to open his own "Kwoon," or training hall.

In 2006, Thomas passed his test to become a Sifu, and became responsible for carrying on the 7 Star Praying Mantis System.